This is currently just concepting an idea. I've been inspired recently by Dave Girard's Mari Me script for Maya- I thought it might be fun to see how Python works in Mari and started wondering about a Texture Robot type script which works across Mari and Maya, sending out the locations of flattened channels to Maya to be hooked into shading networks, a la Texture Robot.

It looks a lot like Texture Robot right now. The main design difference is in linking the various shader inputs to existing Mari channels, rather than filenames in a directory. Again, you'd select the shader type appropriate to the renderer you're using. UDIM support will need to be a feature. 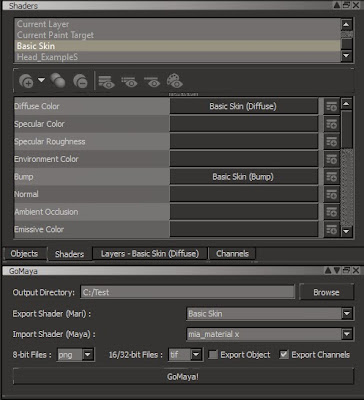 Ok- I have a basic palette style UI working inside Mari. Looking at things a little more closely, it seems it'll be a lot better for the user to be able to simply select an existing Mari shader, which already has channels assigned to the various inputs, than recreate and double up on that stuff with new menus. That streamlines things a great deal... select a folder, a Mari shader, and a Maya import shader (mia_mat_x, Vray Mtl, etc), and you're pretty much ready to go.